MASTERCLASS in contemporary composition for Trombon 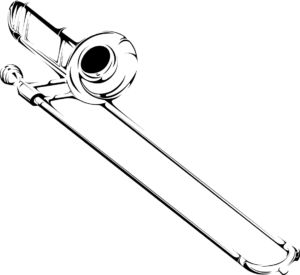 Content and purpose
This masterclass has a specific focus on contemporary composition technique for trombone. The different techniques will be presented by the Italian Composer Girolamo Deraco and the American Trombonist David Whitwell.
During the lessons, he will also address the aesthetic concept of Musictheater, in which both teachers are experts.

Concert
At the conclusion of the masterclass, participants will be invited to write a piece for solo trombone. Two pieces will be chosen to be performed in New York at a later date in 2017. The scores will be selected by the teachers.

Certificate and publication
After the master class each participant will receive a certificate of participation from the Cluster Association of Composers in Lucca and chosen scores for the future concert will be published by Edizioni Sconfinarte. 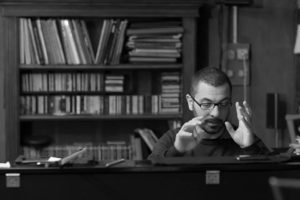 Girolamo Deraco was born in Cittanova (Reggio Calabria, Italy) in 1976. He studied music composition under Maestro Rigacci at the Istituto Superiore di Studi Musicali “L. Boccherini” Lucca, where he received the Master in Music Composition with the maximum possible grade (10/10), cum laude, special mention, and scholarship (the only composer since 1842 when the conservatory was founded to achieve this accolade). He has attended courses and partici­pated in masterclasses with a number of great international Maestroes, including: Andriessen, Corghi, Solbiati, De Pablo, Fedele and Gooch (Truman State University, Missouri, USA - International Exchange Student). He was awarded several scholarships, including Chigi­ana Academy of Siena in 2008, 2009 and 2010 which allowed him to practice under Maestro Corghi, and for which he received certificates of merit.
He has been a finalist and the winner of several international composition contests, amongst which the Windstream, APNM of New York, Boston Microtonal Society, Anima Mundi and the Bartok­plusz Miskolci Operafesztivál, where he won two Guinness world records, the first for the shortest opera ever written - 8 seconds - and the second for the opera most played dur­ing a single evening - 17 times. He has recived the “Riconoscimento di merito” at the PREMIO ABBADO AWARD 2015.
He has collaborated with renowned international artists, and his music has been performed in important festivals. He has been a Jury Member in international composition competitions, and a Teacher for international masterclasses.
Since 2009 he has been Composer in Resi­dence at the Montegral Academy of Lucca under Maestro Kuhn. For the biennium 2016-17 he is Composer in Residence, awarded in Musictheater and Opera Composition residency, for the Ensemble Moto Perpetuo, New York – USA. His music is published by Edizioni Sconfinarte. 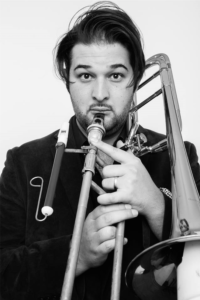 David Whitwell has dedicated his career to new music and to expanding the public perception of the trombone. He is principal trombonist of Ensemble Moto Perpetuo, New York Trombone Consort, Underground Brass, Curiosity Cabinet Ensemble, duo seXny (Sweden), the Xenophobia Quartet (Germany), Eco Music Big Band, the Garden State Philharmonic and the Chappaqua Symphony. He has performed with the Britten-Pears Contemporary Ensemble, the SEM Ensemble, the Netherlands Symphony Orchestra, at the Ojai Festival, Internationales Musikinstitut Darmstadt, International Computer Music Conference, the International Electroacoustic Music Festival, the Festival of Contemporary Music in San Francisco, the Aldeburgh Festival (UK), and regularly at Carnegie Hall and Lincoln Center. As a soloist, he has premiered more than 100 new works for the trombone and been featured with Ensemble Moto Perpetuo, the MIVOS string quartet, as the winner of the Eisenberg-Freid concerto competition with the Manhattan School of Music Philharmonia, the New York Trombone Consort, the Low Brass Connection in the Netherlands, as winner of the Brooklyn College wind concerto competition with the Brooklyn College Wind Ensemble, as well as in master classes he has given across the U.S. and Europe.
David Whitwell holds two Bachelor’s degrees from the City University of New York, Brooklyn College and received his Master’s degree from Manhattan School of Music in 2014, under bass trombonist Dave Taylor. He was named a Britten–Pears Young Artist in 2013–2014.